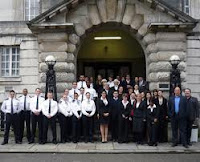 Recently a new mechanism of disease has been identified in the congenital (autosomal recessive) muscular dystrophies that are due to a defect in the glycosylation of alpha dystroglycan. These forms of muscular dystrophy are now known collectively as the dystroglycanopathies. To date mutations in six genes encoding either known or putative glycosyltransferases have been associated with this group of diseases. However, the one most frequently associated with mutations in the Caucasian population is fukutin related protein or FKRP (in Denmark the heterozygote frequency is 1:200).

The candidate will have an interest in the pathogenesis of human neuromuscular disease and protein structure. The project will be based at the Royal Veterinary College where training in muscle pathology will be given. Circular dichroism (CD) spectroscopy and Synchrotron Radiation Circular Dichroism (SRCD) will be undertaken under the supervision of Professor Bonnie Wallace at Birkbeck College who has a particular interest in these techniques and how they may be used to facilitate translational research. This project therefore represents a unique opportunity to combine cellular and biophysical approaches to assess the role of FKRP structure in the pathogenesis of muscular dystrophy.